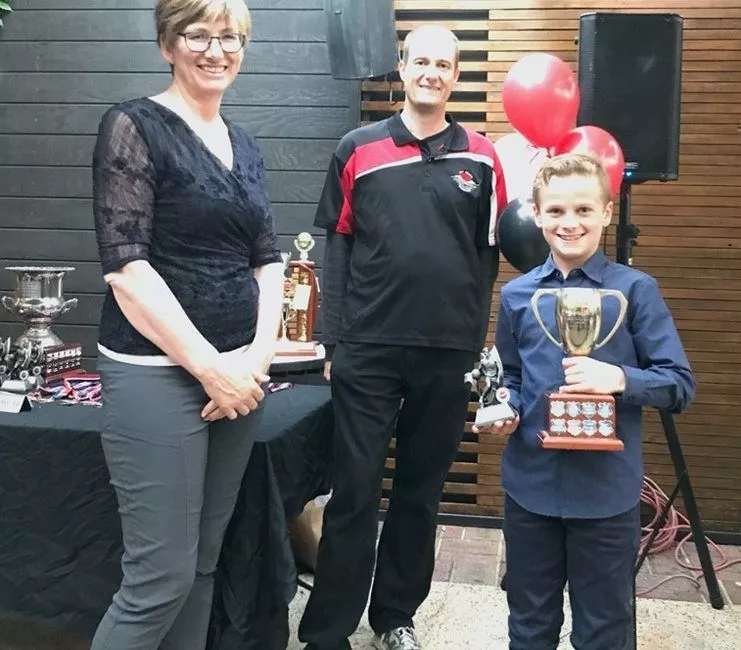 At the end of each domestic season City Beach Basketball Club receives nominations from its coaches, managers, parents and players for the CBBC Perpetual Awards. These awards aim to highlight our standout players, not only in their exceptional basketball skills, but also in their positive attitude and sportsmanship.

The calibre of juniors, intermediates and senior players receiving awards this season was high. The committee invited a shortlist of successful nominees for an evening of pizza, canapés and drinks at the Floreat Hotel on Friday the 20th November. It was an enjoyable night under the stars had by nominees and their special guests. The juniors players were determined high scorers for their teams, while our intermediate and senior players showed a mature grasp of the value of defensive skills. A common thread in the winners’ weave was an admirable respect and consideration for their fellow team-mates. The club is proud of the young talent that is moving up through the ranks while continually displaying great sportsmanship. Photo of Lucy Cahill, winner of the Junior Girl of the Year, alongside club Secretary Megan and club President Paul who presented the awards. Lucy finished the season with the highest scoring average in the u/12 competition. Photo of Mitchell Pearcey, winner of Junior Boy of the Year, with club Secretary Megan and club President Paul.

The awards also allow some of our industrious coaches, managers, parents, caregivers and even family members to be put in the limelight for just a moment, while we sing their well deserved praises for the dedication and time they have given throughout the season. It is this random bunch of strangers who unknowingly become the team behind the team, the backbone of the club, transforming a place to play basketball into so much more. They help create a safe place for all players to become healthy in body whilst also growing in social and emotional strength. This environment allows our players to learn patience on the bench and resilience in game losses, feel first-hand the power of teamwork, strengthen communication skills, build self-esteem and foster new friendships. CBBC and its players are the clear winners with the support crew who stepped up this year.

Junior (U/18) Coach of the Year: Jordan West

Young (U/23) Coach of the Year: Bailey Vanderzanden

Coach of the Year: Jaqui Fry

Manager of the Year: Sonya Derry

CBBC thanked some special people on the committee for their ongoing dedication to keeping the club running smoothly. If you have not heard the name Megan Watters, don’t worry, she most likely knows you, your child and your child’s team coach and manager. She is the current Secretary, has earnt many stripes over the years and was awarded CBBC Female of the Year. Franklyn Jardine, current Vice President, is another loyal committee member who worked tirelessly throughout the season. His efforts securing new club sponsorship with New Home Building Brokers (NHBB), as well as coordinating the exciting, new club website for 2021 earnt him the CBBC Male of the Year. The West Family was recognised for the dedication to the club with Paul West taking on the role as Club President as well as coaching an under 16 boys team, wife Danielle assisting the committee with social media and events and son Jordan coaching a junior team of boys.

Female of the Year: Megan Watters

Male of the Year: Franklyn Jardine

Family of the Year: West Family The night ended with some special thanks from Paul West to Committee members who went above and beyond their roles this season. Meike Chang was thanked for her tireless organization of uniforms and manager kits, Vice President Franklyn Jardine for his long hours on the website creation and Secretary Megan Watters for being our club “Siri” – the fountain of information for all CBBC queries. Thanks also go out to Gillian McDonald for her epic efforts with registrations, Adam Floyd our Coach Coordinator and Matt Pickford our Treasurer. The CBBC committee worked hard to achieve many goals they set out to conquer and the award night was a lovely way to close the season.